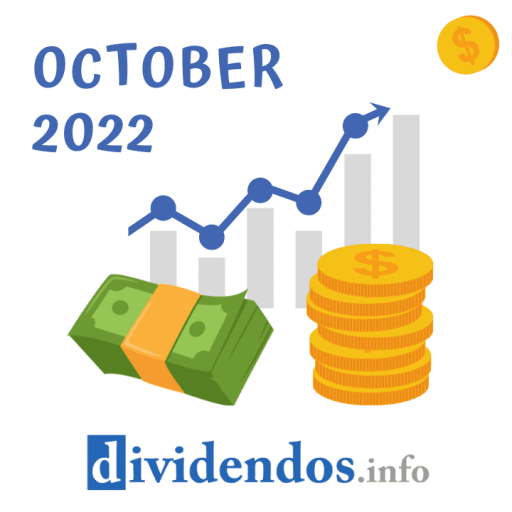 October has been a quiet month, nothing compare with last month. Few buys, a couple of rotational sells, and plenty of dividends as usual.

Highlight that it has been the month so far to receive more dividends in the United States 🇺🇸, despite last month’s sales many dividends were already discounted (that is, the ex-dividend date had passed for it despite not having certain shares have received dividends).

It will take time to break this monthly dividend record in the US due to recent sales, but we are happy to have reduced the margin. That said, let’s go into detail with the movements of the month.

Like every month, we are going to split the movements of the month into three blocks: purchases, sales and dividends to make reading more enjoyable.

This month we made some purchases to increase dividends, most of them focused on companies with a monthly dividend. These were the purchases made in October:

This month there were two sales in the United States (by rotation to other values), these were:

In terms of dividends, this October we have received a total of 10 dividends, all of them from American companies. These have been the dividends received in October by country and ordered by payment date.

In October 2022 we receive 0 euros of gross dividends from Spanish companies (before paying taxes).

➡ Dividends in euros represent an increase of +0% compared to the same month of the previous year.

American companies contributed to us in October 2022 a total of +1023.04 US dollars of gross dividends.

➡ Dividends in US dollars represent an increase of +349.15% compared to the same month of the previous year.

RECORD 💪🏻 This month we have received the highest number of dividends in the United States, exceeding 1000 usd for the first time.

Note: the percentages above are calculated using this tool.

This month our portfolio started to revive after last month’s disaster. The rise in the euro-usd pair, some buying we did and the recent rallies in the markets helped.

This month we have not published any new pages, we only update the pages of companies that we have already published, as well as the next dividends, and the dividend history.

Another month that leaves in 2022 and there are only two left. This month flew by, I don’t know if it happened to you too.

Personally, next month looks good, two weeks of vacation to the United States 🙂 since before covid we have not gone there again.

And here is the october 2022 overview. Until next time, investors!